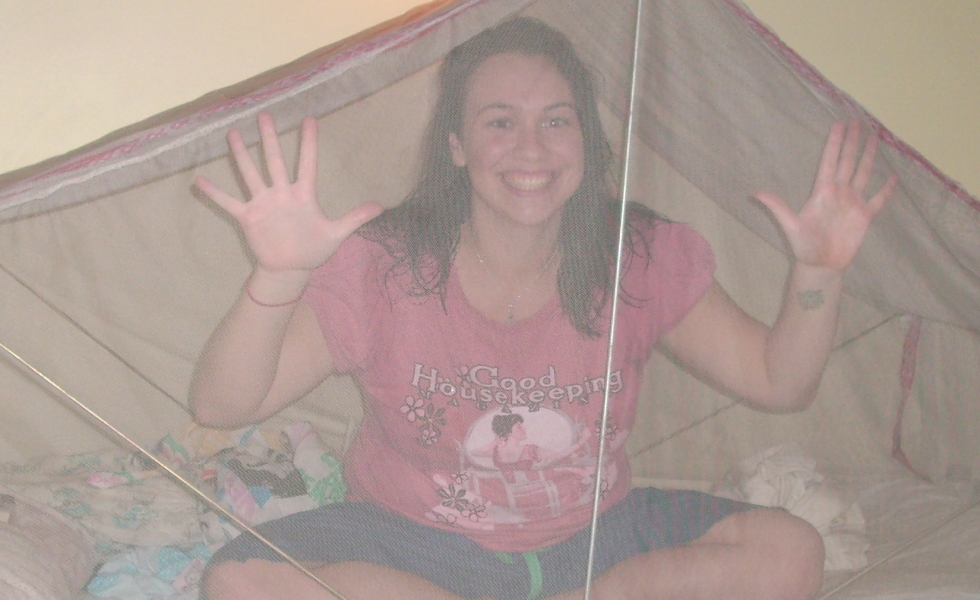 exactly 10 years ago today, i wrote and posted this blog post about me getting malaria for the very first time! i don’t recommend getting malaria, it sucks, a lot. but at least with malaria, you can take some pills that will make you feel better and increase your chances of survival. (dengue-not so much… but that’s a story for another day!)

enjoy reading all about my ‘good story to tell!’

When I lived in India I quit taking my malaria prophylaxis. We had it good. Everything would get sprayed once a week and I slept in my mosquito net every night. Wait. I take that back. Sometimes on the really hot nights I would flip the net off of the bed because I thought somehow the mesh of the mosquito net was blocking the cool air from getting to me. Anyway. I never really got bite so I never worried about getting malaria. Thus I quit taking my medicine. Like an idiot.

After 2 days in Zambia, I was scared into religiously taking my malaria prophylaxis. Not only is malaria a terrible disease where blood parasites are put into your body by mosquitoes, but over 1 million people die every year from the disease. Along with headache, fever, chills, body aches and shakes, you feel like you are going to die. I wanted nothing to do with it. I hate being sick. I’m a firm believer in the flu shot. There is nothing I hate more in this world than throwing up. That was enough incentive for me to take my medicine everyday.

Unfortunately, you can still get malaria even if you take a prophylaxis. It just won’t be as severe because the parasite count isn’t allowed to reach dangerously high levels. But I wasn’t going to risk it, I was going to do everything humanly possible to NOT get malaria. I take my medicine everyday. Everyday.

I also had 2 other methods to protect myself against malaria.

If you say you won’t get malaria, you won’t get malaria. It’s like when I was in school and I would say, “Uuugggh. I’m going to fail this test.” Then my dad would say, “Well, of course, you are going to fail it if you say you are going to fail it.” I’m sending positive anti-malarial vibes out in to the universe! Plus female mosquitoes are the ones that carry the malaria parasites and they only come out between the hours of 9pm and 6am. Fun fact: they are also silent. The male mosquitoes are the ones that buzz.

And 2) The Kim Burns Anti-Malarial Treatment

Drink a gin and tonic everyday. Why g&t’s?

When the Europeans, like David Livingstone, were wandering around Africa ‘discovering’ things, they were dying of Black Water Fever (malaria). The only thing the explorers found that would work against the Fever was taking quinine. Which is found in tonic water. And you can’t have tonic without the gin!

I was adhering to all 3 of these things and then I woke up one morning in town, with mosquito bites all over my hands and arms. Fatal step #1. I forgot to close the mosquito net before I went to bed. Fatal step #2. I said jokingly to Kim, “I’ll probably be back in town in 7-10 days with malaria!”

So I headed back to the village. I was hanging out getting back into the swing of things, and cleaning my house. School started and I was feeling perfectly fine. Then I went to bed. It is hot season so I took the blankets off my bed already. I was cold. I had to dig out my blankets and a sweatshirt. Then as I was trying to fall asleep I got the chills and shakes. This is when I thought something was up. I fell asleep hoping it would go away. No such luck. I woke up the next morning sweating beyond belief. And my head was killing me. I got up to pee and had to come back in my house to sit down and rest. I dug out the extra strength ibuprofen and took 2 to start. I found the strength to go and get fire so I could make coffee and told my bamaama that I thought I was getting sick. I told her my symptoms. She immediately said it was probably malaria.

Then things got bad and a little fuzzy. The high fever, chills, the confusion. I finally started to write down what time I took what medicines because I couldn’t remember. I couldn’t eat anything but my bamaama forced me to eat nshima, which cures everything, as well as being the staple food of Zambia. My family finally insisted I go to the clinic. Zambians hate seeing me sick so instead of putting up a fight, I went with my sister Sandra. The clinical officer was pretty sure it was malaria but didn’t have the reagents to test my blood to make a positive diagnosis. I went back home and called Peace Corps Medical. Yup. It sounds like malaria. Start taking Coartem (it gets rid of the parasite), go to town, and take the blood test.

I went to town the next day and what a ride that was. It was the second worst transport ride of my life, and that is saying something because I’ve have some pretty awful rides. It seemed to take forever to get there but I finally made it. I took the blood test. It came back negative but that is normal because I was taking the prophylaxis and I already started the Coartem. No doubt about it. I had malaria.

It was like the worst flu you have every had multiplied by a million.

But I survived and was back home less than a week later.

I was at school talking to some of the teachers about it. They asked me if it was my first time having malaria. I told them yes. To which they said, “At least you have a good story to tell when people ask you about living in Africa.”

I will have malaria parasites living in my liver for the rest of my life forever making me more susceptible to getting malaria. But at least I have a good story to tell?

loved reading about how painful malaria is? leave a tip in my tip jar!