easter is almost here, and you’ll wanna stick around for the hilarious cultural fun we had in the village! a lot of things happen in these journal entries, and a few require a bit of background that i haven’t written about before.

i got ringworm! me, kim and brittany went to the mission in kalomo, stay overnight, drink good coffee and volunteer in the orphanage. and i suspect one of the very cute kids there gave me ringworm. i can’t be 100% certain, but i’m 98% sure that’s where it came from.

during my time as a peace corps volunteer, i became good penpals with josh’s mom, mrs. patty vetter. we all call her mrs. pv. and the amazingness of mrs. pv really shines in these journal entries!

and while i know that it isn’t 11-13 april, i wanted to share these journal entries with you since it is easter this weekend!

back in the village! regina took me back on thursday morning. my house was finished! well, most of the way. still waiting on one window, but the cement is done and i put up plastic yesterday. been painting a bit. i painted one wall in my bedroom, but i’m gonna run out so i just stuck to the one. maybe i’ll lime the others. i’m not sure if that would work or not. i want it to look nice for the family since they are the ones getting the house, not another volunteer.

my chalkboard project is also coming along. i’m gonna paint the black today i think. i hope i have enough paint. i only bough a liter. it was expensive. and i’m still trying to save money. i really need to try and start a budget. one that doesn’t include 8 million trips to livingstone. anyway, i digress.

my house is looking nice. and as it turns out, they did knock down a whole wall when they were putting in the windows. but they managed to put it all back together. so i was right! i knew that my house would fall apart!!! (i was just expecting to come back to a pile of rubble.)

the kids killed a small snake in my cikuta [kitchen] this morning. it’s getting to be that time of year again. cold season is here and the snakes are trying to warm up. as long as they aren’t in MY house, i’ll be ok.

i gave sitemba ringworm on his head. but luckily, they found the cream and his seems to be going away a lot faster than mine. but then again, i’m not really all that good about putting on the cream ALL the time.

tomorrow i’ve having an easter egg hunt with the kids. i boiled 45 eggs with jacqueline yesterday. today, we are coloring them. tomorrow we will try to have an easter egg hunt. we’ll see how it goes. they all thought it was hilarious when i explained it to them!

saw a kid flying a kite made out of a plastic bag the other day on the way back to the village. just a few days after i talked to mom about it. i had never seen it here before, she was asking if i want her to bring kites, i laughed at her. then 3 days later, i see kids flying kites. crazy!

i don’t think i talked about this yet, but mrs pv sent me a box! well, for me, kim, kapree and deb! it was packed full with food, candy, lotion, chapstick and the easter egg coloring kit (which gave me the idea to bring an american easter to my village). she is WAY too sweet. and like i told josh, she just wanted a daughter! so all of us girls decided we would gladly be her honorary peace corps daughters.

she also sent funfetti cupcakes with the frosting, sprinkles and even the paper cupcake holders!! i made them right away and we had them when we were all at the house for a meeting. i saved a bunch for josh and chris [josh’s brother] to have when i went down to livingstone the next day. unfortunately, the frosting melted ALL over the place, including my book bag. but they still tasted the same. needless to say, mrs pv is the nicest lady that i have ever become pen pals with!

the easter egg hunt was really fun! i made the kids all stay in my house while me and jacqueline hid the eggs. i decided it was best to hide only ONE egg per kid, so we hid the eggs that they decorated like people the day before.

the kids were all so excited when they ran out of my house to go and hut. they all started running around like crazy people. sonia found the first one, then they all seemed to get the idea and they all found one at about the same time! except patricia, winnie and jeannie. so i helped them all find one.

i took pictures too. and because this was a typical american easter, joy was screaming and crying in ALL of the pictures!

then we all ate eggs. who knew 39,000 kwacha worth of eggs and a coloring kit from america could give such a good time! and since eric is home from school break, i got a family picture of everyone!

later that day, winnie came and told me, in tonga, that there was a snake at her house. it was in the roof! creepy! i watched them try and knock it out with rocks. then i got on my bike to go up to the mission and i came across a snake in the path eating a frog. or trying to. it was kinda funny to watch since the frog was trying to jump around to get away.

i drank a coke at ms kamuti’s shop and was bothered by some drunk guy. but ms betty [who works at the shop] told him to leave (which is something you don’t see everyday!).

biking home the long way, i stopped at david’s place and chated with him for a while. they (all the kids adopted by ms peyton [the woman who founded the school]) are having a memorial service for her at the end of the month. apparently, kaonde, the first president of zambia, is coming. and even the us ambassador to zambia. it’s going to be way bigger than i thought, so i should really try and get there! 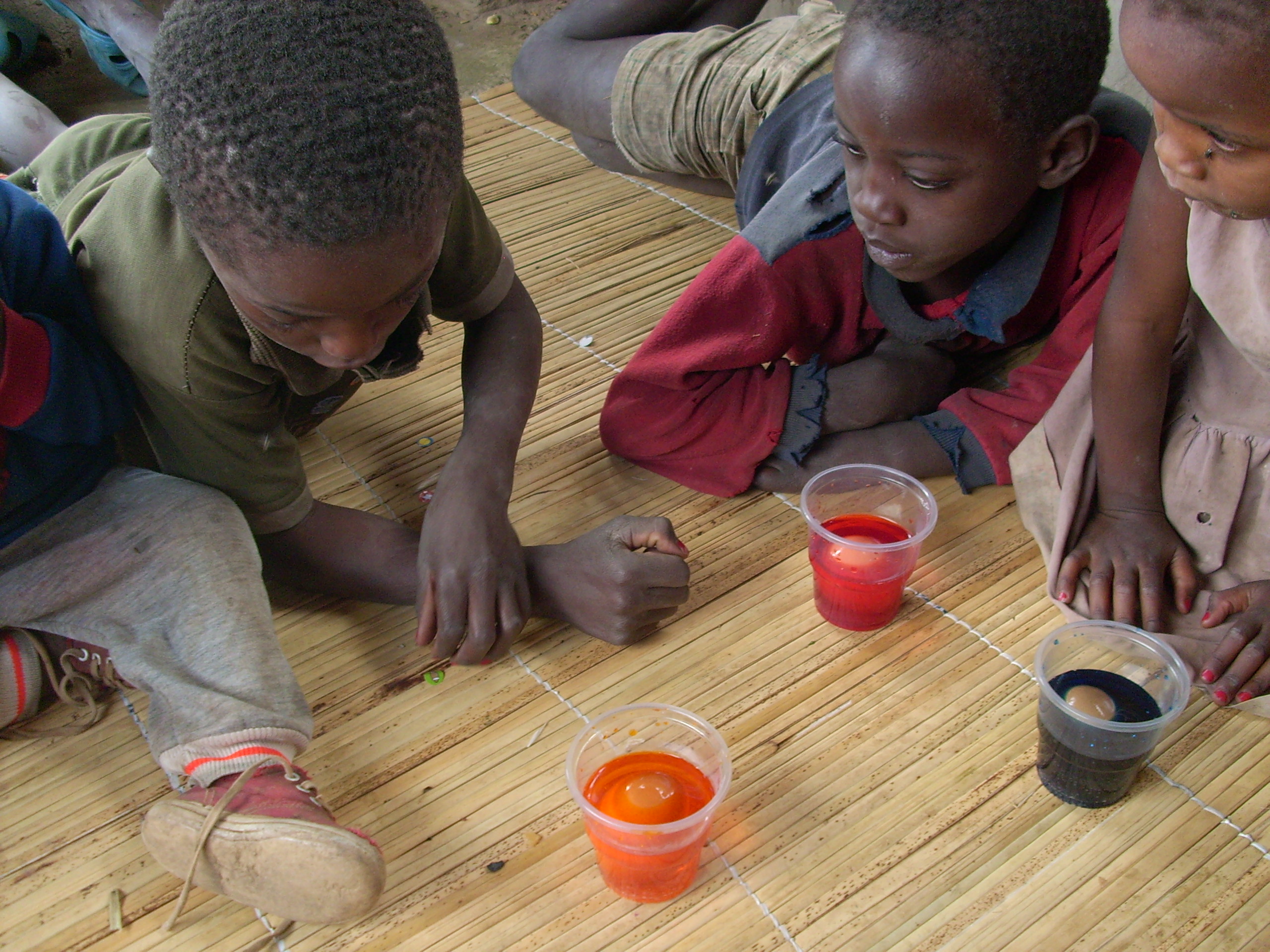 loved reading about having an american easter in zambia? i did too! leave me a tip!